AUD News: US Govt. shutdown, Brexit and Aussie labour data dominate the week that was

25th January 2019
The AUD chucked its toys on Thursday and fell pretty heavily against all major currencies. This came amidst speculation of the Reserve Bank of Australia (RBA) cutting interest rates in two weeks, weak economic data out of Europe, and a rebound in the USD. As it stands, one Aussie dollar will buy you:
0.6893 US dollars
74.3087 Japanese yen
0.6012 euros
0.5218 Great British pound
0.8898 Canadian dollars
1.015 New Zealand dollars

Recap of the week that was
The US government shut down has rolled on into day 34 with no end in sight. President Trump tweeted on Tuesday that he wouldn't back down with regard to the funding request for his US/Mexico border wall despite hundreds of thousands of Federal employees about to miss their second paycheck in a row. If you are travelling to the US soon, we recommend checking out how the shutdown can affect your holiday and travel money.
The US / China trade negotiations are still “miles and miles from getting a resolution” according to US Commerce Secretary Wilbur Ross. Ross further explained, “trade is very complicated. There are lots and lots of issues.” Further meetings between US and China government officials are scheduled for next week in Washington, where it is hoped they will edge closer to reaching a mutually beneficial deal. Ross stated that he sees a “fair chance we do get to a deal”.
Fingers crossed this deal happens sooner rather than later for the sake of the Aussie dollar. The Australian economy’s intrinsic ties to the success of China means the longer these discussions and the accompanying uncertainty go on, the more downward pressure there is on the value of the AUD.
In the UK, Prime Minister Theresa May has been negotiating her little heart out in the hopes of presenting a Brexit deal the British MPs will support. This task is much easier said than done, with MPs extremely divided on the subject. The fast approach of the March 29 deadline leaves MPs and British citizens alike wondering how, and even if, Brexit will take place.
Back on home shores, yesterday the National Australia Bank announced they were increasing their standard variable home loan rate by 16 basis points (one basis point is equivalent to 0.01%). This rate hike matches moves made by the other three big banks (CBA, Westpac and ANZ) last September, and means that any RBA hikes will likely be pushed out further. Some commentators are even forecasting a rate cut by the RBA which would not be ideal for the value of the Aussie dollar. 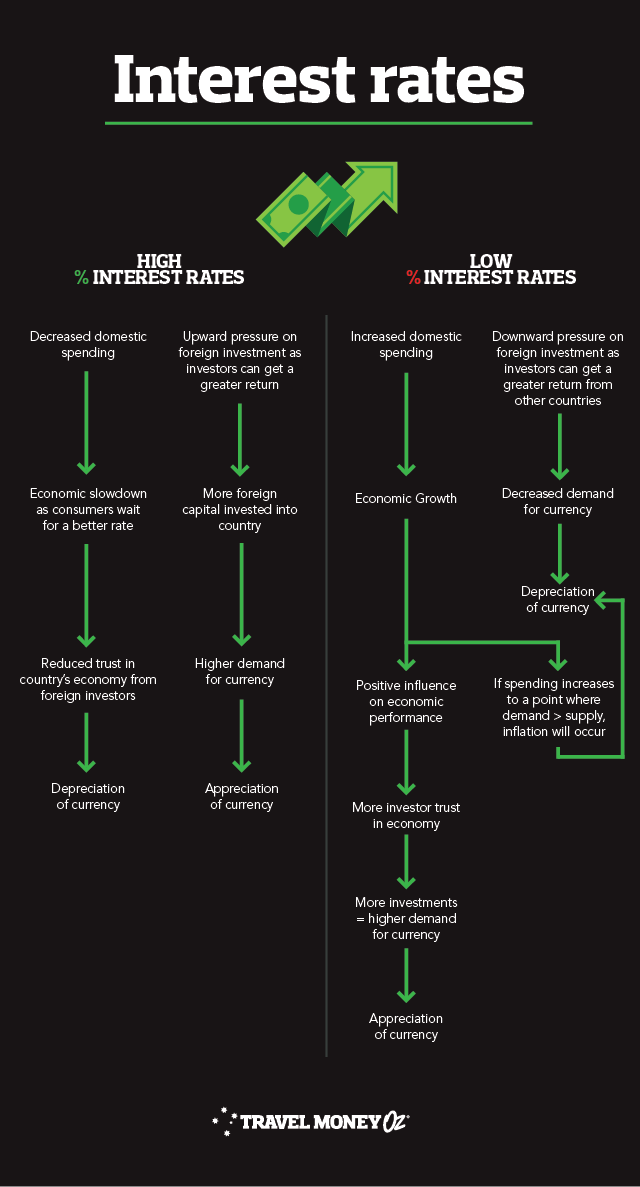 This week also saw the release of Australian labour data. In the last month, we saw an extra 21,600 new jobs (vs. the 18,000 forecast) added to the economy. The unemployment rate also decreased by 0.1% to 5.0%.
Started a job and already wanting to plan a holiday? Check out our destination guides for some holiday inspo!
What could affect the Aussie dollar next week?
In Australia, we will see the release of Q4 inflation data and the trade prices index. The trade price index gives a good indication of how our terms of trade are going.
The market could expect a small rise in the trade price index in the value of the AUD as a result of a lift in commodity prices. Furthermore, it is expected there will be a small rise in import prices due to the lower Aussie dollar (aka your online shopping cart is a little bit more expensive. Damn you, international shipping.) Overall though, the terms of trade remain at a pretty high level which continues to support company profits and government revenue in Australia.
The US Federal Open Market Committee will have a meeting. The market is anticipating the outcome of the meeting will be keeping interest rates on hold amidst deteriorating US and global economic outlooks. This is good news for the Aussie dollar.
In Europe, there will be a focus on Q4 Gross Domestic Product and January consumer price index data. However, the key focus will be British MPs voting on amendments to the current Brexit deal on Tuesday (Wednesday morning Australian time). Whilst these changes are non-binding, should the vote be successful, it will put a significant amount of pressure on Theresa May to make the changes.
This blog is provided for information only and does not take into consideration your objectives, financial situation or needs.  You should consider whether the information and suggestions contained in any blog entry are appropriate for you, having regard to your own objectives, financial situation and needs.  While we take reasonable care in providing the blog, we give no warranties or representations that it is complete or accurate, or is appropriate for you.  We are not liable for any loss caused, whether due to negligence or otherwise, arising from use of, or reliance on, the information and/or suggestions contained in this blog.
All rates are quoted from the Travel Money Oz website, and are valid as of 25 January 2019.

Travel hacks: Make the most of your time in the Philippines

AUD News: AUD holds strong as the US government reopens and British MPs face another vote.