5th February 2019
After ending last week on a high, the Aussie dollar is still holding strong against most of the major currencies. As it stands today, one AUD will buy you:
0.7026 US dollars
75.9359 Japanese yen
0.6058 euros
0.5326 Great British pound
0.891 Canadian dollars
1.0131 New Zealand dollars
With Chinese stock markets closed from Monday until Friday for Chinese New Year, markets are looking to the USA and Australian domestic data for insight on the value of the Aussie dollar.

Last week, the Federal Open Market Committee (Fed) confirmed the market's suspicions, stating they would remain patient on any future interest rate moves in the USA.
As a result, it’s fair to say that the Fed has a more ‘dovish’ stance (definition below), and the USD has been a little bit weaker across the board. Whilst the Fed are still communicating reasonably strong economic growth in the future, they did note that “we are now facing a somewhat contradictory period”, adding that conditions are “less supportive of growth”.
This announcement helped riskier assets (like the Aussie dollar) and commodities (which Australia exports a lot of), hence making it positive for the AUD.
In other USA news, President Trump will make his State of the Union address today at 9pm American time (Wednesday morning for Aussies). He has teased the idea of a National Emergency in order to secure funding for his border-wall, as well as allowing him to spend money without approval from Congress.
This comes at a time where short-term funding to keep the government open will only last until February 15th, and both sides of the US government are no closer to making a deal regarding Trump’s wall. So, whilst the shutdown may be momentarily over, the issues certainly aren’t solved.
Should the government shutdown resume or continue to affect the country, we have put together a nifty guide on how it may influence your travels.

Since the uplift seen after the Fed announcement last week, the Aussie dollar faced a few headwinds. These include some pretty weak December retail sales figures, which show an increase of just 0.1% for Q4.
New South Wales data also showed a very weak Q4, with sales down 1.1%. This may be in part due to the fall in house prices we have been seeing over the last six to nine months. Either way, both NSW and December retail sales figures were well below consensus and point to the impact of having Black Friday-type sales in previous months, as well as a consumer that appears to be slightly stretched when it comes to their budget.
The Reserve Bank of Australia had their first meeting for the year today, keeping interest rates on hold at 1.50% for a record 30th consecutive month. This comes as no surprise to markets that have been monitoring slower levels of inflation, less wage growth and a generally slower economy. The RBA also cut its annual economic growth forecast to around 3.00%, down from 3.50%.
Despite the low official cash rate, borrowers have been stung with out-of-cycle rate hikes as a result of rising interest rates in overseas markets. Last week ME Bank and ING both jacked up interest rates, following NAB’s lead the previous week. The average owner-occupier mortgage rate has risen 14 basis points (one basis point is equivalent to 0.01%) since September last year. The average variable rate now sits at 4.37% according to Canstar, with the lowest at 3.54% and highest 5.59%.
When considering all of this information, financial markets are now predicting the next rate move is likely to be a cut. This is especially likely considering the impact of declining house prices on household spending. House prices feed into societies perception of wealth. Lower house prices equate to less wealth in the eyes of consumers.
A rate cut would not be great news for the AUD, as it means a lower return for investors buying the Aussie dollar (therefore making it a less desirable investment).
If you’re worried about how movements in the Aussie dollar will affect your holiday spending money, be sure to add Rate Guard onto your next transaction in store. It’s free, and if the rate changes within 14 days we will refund you the difference*. 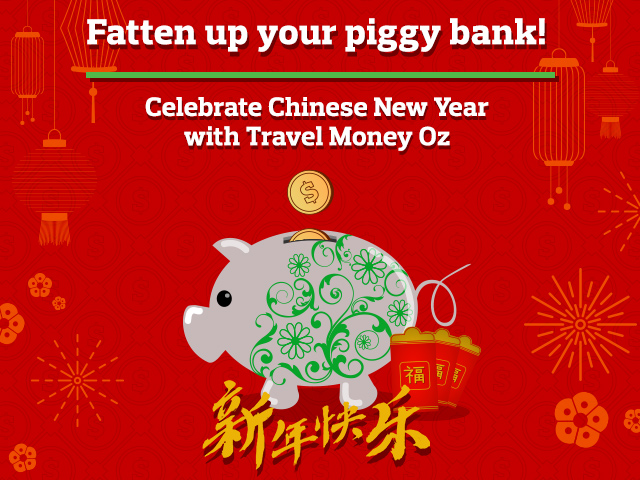 This blog is provided for information only and does not take into consideration your objectives, financial situation or needs.  You should consider whether the information and suggestions contained in any blog entry are appropriate for you, having regard to your own objectives, financial situation and needs.  While we take reasonable care in providing the blog, we give no warranties or representations that it is complete or accurate, or is appropriate for you.  We are not liable for any loss caused, whether due to negligence or otherwise, arising from use of, or reliance on, the information and/or suggestions contained in this blog.
All rates are quoted from the Travel Money Oz website, and are valid as of 5 February 2019
*Terms and conditions apply to Rate Guard. See https://www.travelmoneyoz.com/rate-guard for more information.

Where to travel in 2019 according to your Chinese Zodiac

Leave your ex at the airport this Valentines Day