5th March 2019
It’s been a relatively quiet start to the week in currency markets. The key themes that have dictated markets for the past few months are still out there waiting to be resolved. They are, of course, the US/China trade talks and Brexit. As it stands today, one Aussie dollar will buy you:
0.6892 US dollars
75.735 Japanese yen
0.5995 euros
0.5173 Great British pound
0.8872 Canadian dollars
1.0034 New Zealand dollars
0.9052 Singapore dollars
Before we jump into what is affecting markets this week, we’ve compiled a quick summary of how the AUD performed in February 2019. Unfortunately, we closed out February weaker on the USD, EUR, GBP and CAD fronts. This was cushioned by an increase in the AUD’s value against the NZD and JPY. 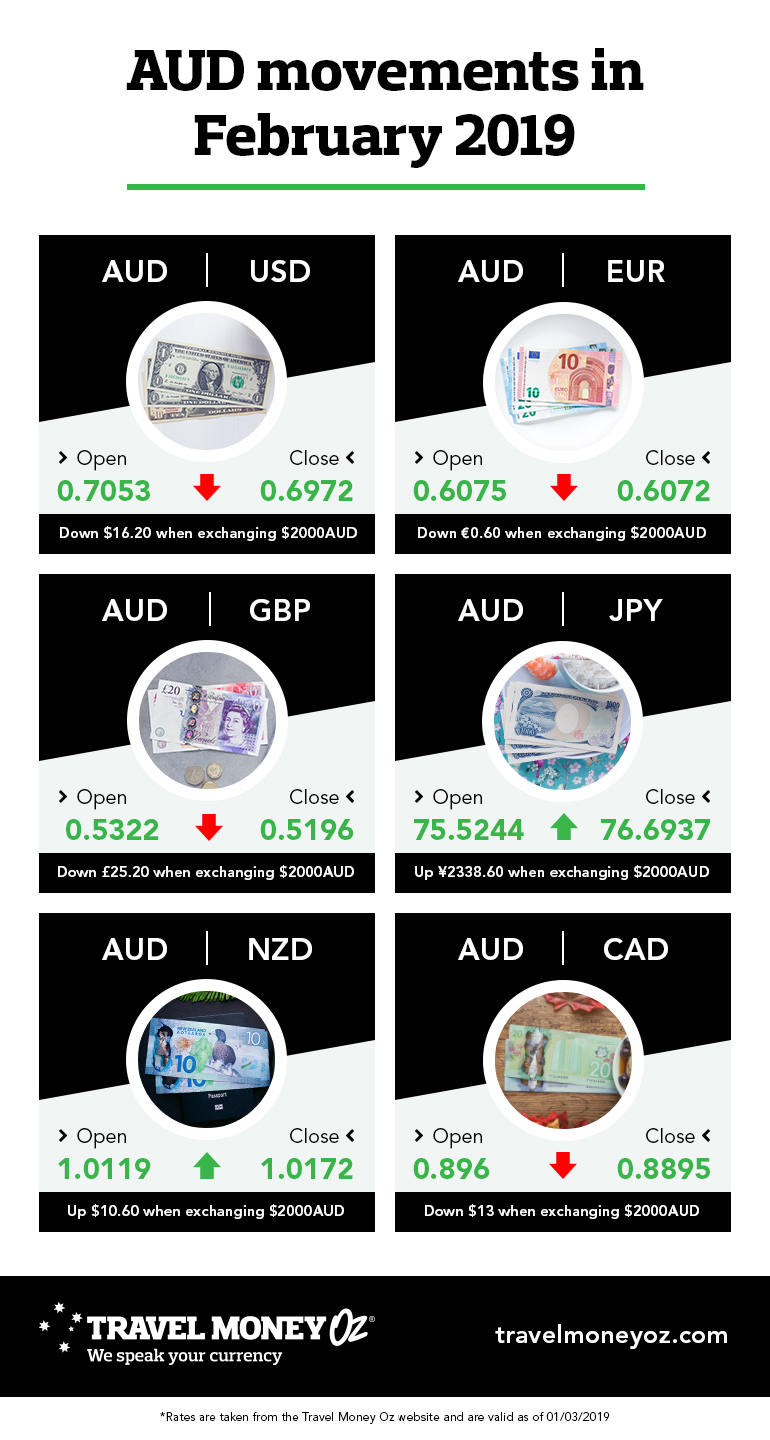 What’s the what in markets this week.

Chinese shares have had a pretty good run, with the China Shanghai Composite Stock Market Index rising from around 2,500 to 3,028 index points so far this year. This means they are now trading at June 2018 levels, which is a huge positive.
The stock market increase comes despite the ongoing trade negotiations with the US. This could possibly indicate that shares were massively oversold in 2018 as signs of a slow down in the Chinese economy were becoming apparent and they are now recovering. For some context, the index reached an all-time high of 6,092 in October of 2007. There are expectations that the National People’s Congress will outline further stimulus measures for the economy while the US agreement edges forward… slowly.
Even if the US and China do reach an agreement, it is unclear what kind of impact this will have on Australia and in turn the Australian Dollar. On one hand, an agreement would remove uncertainty and should increase Chinese exports which are positive for the AUD. On the other hand, the agreement could include deals with US companies that are in competition with Australian companies which could potentially be negative for the AUD.

The GBP has shown a little bit of strength over the last couple of weeks as the chance of a hard Brexit has reduced significantly. Good news for the UK, however, not so great for Aussie travellers exchanging their AUD.
It sounds like the Withdrawal Agreement (WA) has a great chance of being agreed upon or at least gaining a majority after the next vote on March 12th. This comes after the lead Brexiter group appeared to have softened their opposition to Prime Minister Theresa May’s current WA. Ministers are also seeking to secure some legally-binding changes to May’s current deal that will make it more appealing to MPs come vote time.
Should the WA be voted down next week, May will bring forward a vote to delay Brexit in order to avoid crashing out of the EU with no deal.
Either way, there is unlikely to be any clear direction for GBP movements until a decision has been made to either accept the current agreement, leave the EU with no WA, or delay a decision and Brexit all together.
If you are planning a trip to the UK soon, we recommend signing up for currency alerts. If the GBP hits your preferred level we will let you know. Don’t forget to add Rate Guard to your transaction in store as well! If the UK ever makes a decision (and it has a positive effect on the value of the GBP) you can visit us in store within 14 days of your purchase and we will refund you the difference*.

Back home in Australia, the Reserve Bank of Australia (RBA) has left rates on hold as widely expected, as well as released the corresponding minutes.
RBA Governor Lowe will add some more detail to these minutes when he speaks in Sydney tomorrow on ‘The Housing Market and the Economy’. It will be interesting to see what he says and how the RBA sees house prices affecting consumption in the economy. In the minutes released today, the RBA stated that “the main domestic uncertainty continues to be the strength of household consumption in the context of weak growth in household income and falling housing prices in some cities”. Car sales figures also released today have perhaps already given them a hint - they were down 9.3% compared to February last year. House prices are a huge indicator of how consumers perceptions of wealth. Lower prices = lower perception of wealth = potential slow down in spending and the economy.
We will get an update tomorrow when Australian GDP data is released. The consensus forecast is 0.5% quarter on quarter growth, bringing the full year figure to 2.7%. This is already lower than their downgraded forecast of 3.0% (was previously 3.25%) given last month.
Bottom line is that it appears as though the Australian economy is slowing a little bit. Whether it is slowing enough to force the RBA to lower interest rates remains to be seen, and is definitely something we will be discussing a lot throughout the year.
As a reminder, the market is very close to pricing in a full cut by the end of 2019, with WBC chief economist Bill Evans forecasting two rate cuts in 2019. This is not ideal for the Aussie Dollar, as lower interest rates make the AUD a less viable opportunity for overseas investors seeking a higher return.

This blog is provided for information only and does not take into consideration your objectives, financial situation or needs.  You should consider whether the information and suggestions contained in any blog entry are appropriate for you, having regard to your own objectives, financial situation and needs.  While we take reasonable care in providing the blog, we give no warranties or representations that it is complete or accurate, or is appropriate for you.  We are not liable for any loss caused, whether due to negligence or otherwise, arising from use of, or reliance on, the information and/or suggestions contained in this blog.
All rates are quoted from the Travel Money Oz website, and are valid as of 5 March 2019.
*Terms and conditions apply to Rate Guard. See https://www.travelmoneyoz.com/rate-guard for more information.

AUD news: China and USA data leads to rough week for the AUD